The Manila Concession serves as the flagship concession area of the company. It encompasses 23 cities and municipalities traversing a 1,400-square kilometer area that is divided into the following business areas: Makati-Mandaluyong, Marikina, Quezon City, Taguig-Pateros, Pasig, and Rizal. The company’s customer base is composed of a broad range of residential, commercial, and industrial consumers serving a population of close to 7.3 million. Providing reliable access to safe water and proper sanitation services to this vital area of the mega-metropolis, Manila Water promotes liveability and enables progress.

It was a positive year for the Manila Concession as performance continued to be robust in 2018. Revenues grew by eight percent to ₱16,234 million, driven by three percent growth in billed volume to 503.3 million cubic meters (mcm). This was brought by the three percent increase in billed connections to 986,756, and an improvement in the average effective tariff primarily due to the implementation of the 2.80 percent consumer price index (CPI) adjustment effective January 1, 2018. 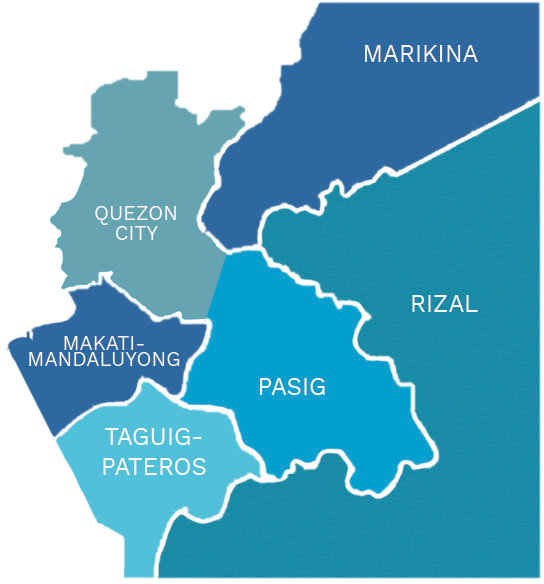 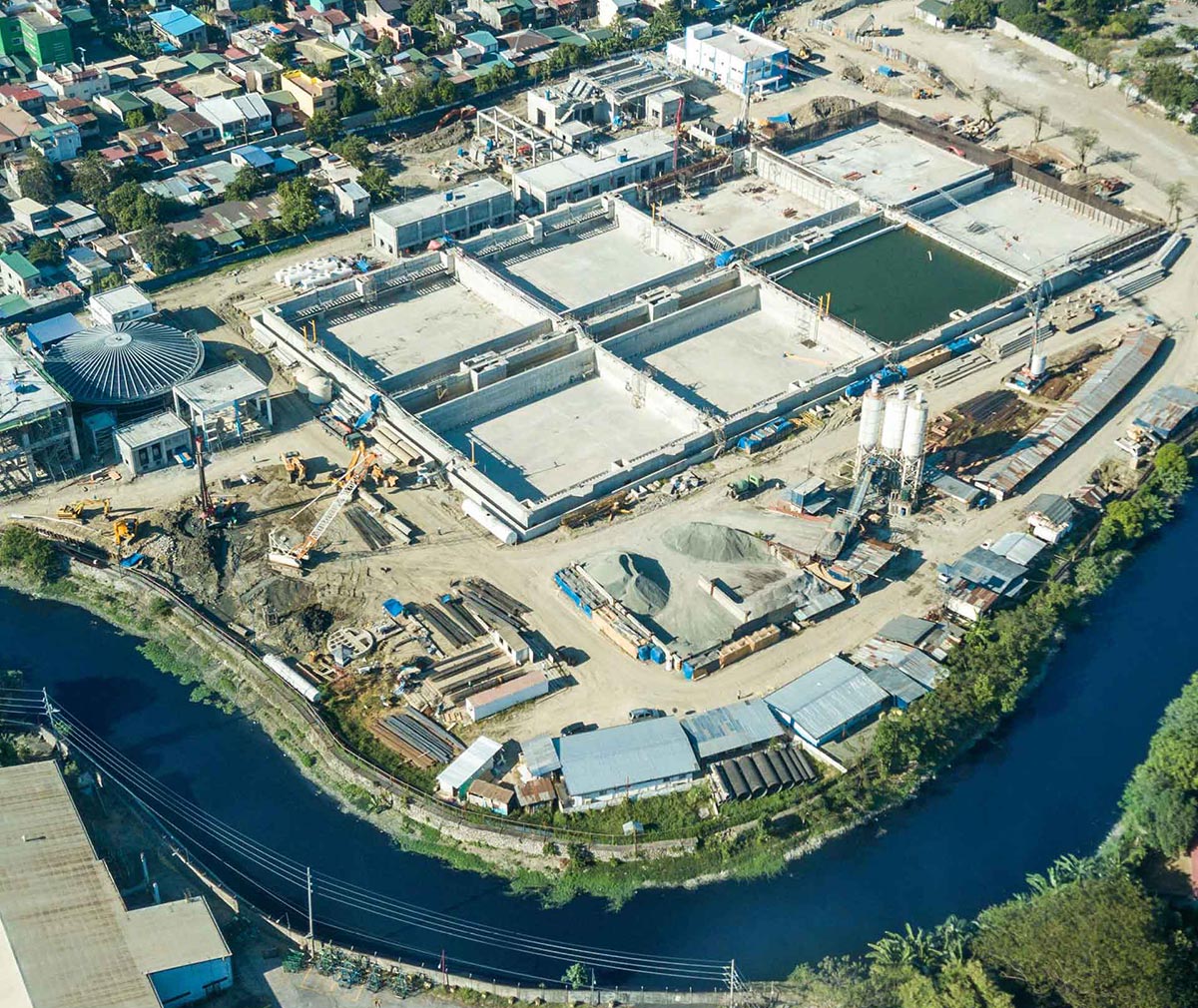 The year also marked the successful completion of the fourth Rate Rebasing exercise between the company and the Metropolitan Waterworks and Sewerage System (MWSS) last September 2018. The approval of the five-year business plan will result in the development and execution of several interim water source projects identified by the MWSS to meet the company’s medium-term requirements, subject to the validation of the MWSS Regulatory Office as to feasibility and cost.

Together with the business plan, a new set of tariffs was also approved and became effective on mid-October 2018. To mitigate the impact of the tariff increase, the Manila Concession staggered its implementation over a five-year period from 2018 to 2022. Depending on the final approval of the mid-term water source, the total increase across the approved period is between ₱6.22 to ₱6.50 per cubic meter.

The approved business plan highlighted four sustainability pillars necessary to ensure the viability of the environment which sustains the water cycle, and on which the company establishes its long-term viability. These pillars are:

In the Manila Concession, the primary water source is the Umiray-Angat-Ipo- La Mesa water resource system, and it will have additional water supply by abstracting 100 million liters per day (mld) of raw water from Laguna Lake through the Rizal Province Water Supply Improvement Project (RPWSIP/Cardona Project). Ninety-five percent of the first phase of RPWSIP was completed in 2018. The project started its water delivery in the first quarter of 2019, benefitting a population of approximately 800,000 in three key municipalities in the province of Rizal, namely Taytay, Angono, and Binangonan. As part of the business contingency plan during periods of low water supply, the company will re-activate decommissioned deep wells that can provide additional water supply.

Given the critical need for additional water sources to help achieve water security, Manila Water has conducted feasibility studies for the development of medium-term water sources to support the water security masterplan of the Manila Concession. MWSS will also construct additional dams for its concessionaires within the next years to meet the water requirements of an increasing number of customers.

The rehabilitation and protection of the critical watersheds of Ipo, La Mesa and Umiray are valuable to the Manila Concession because it is essential to mitigate the risks associated with the quality and quantity of raw water that is being supplied to Metro Manila and parts of Rizal. The National Power Corporation manages the Angat Watershed Reservation where the Manila Concession abstracts most of its raw water. 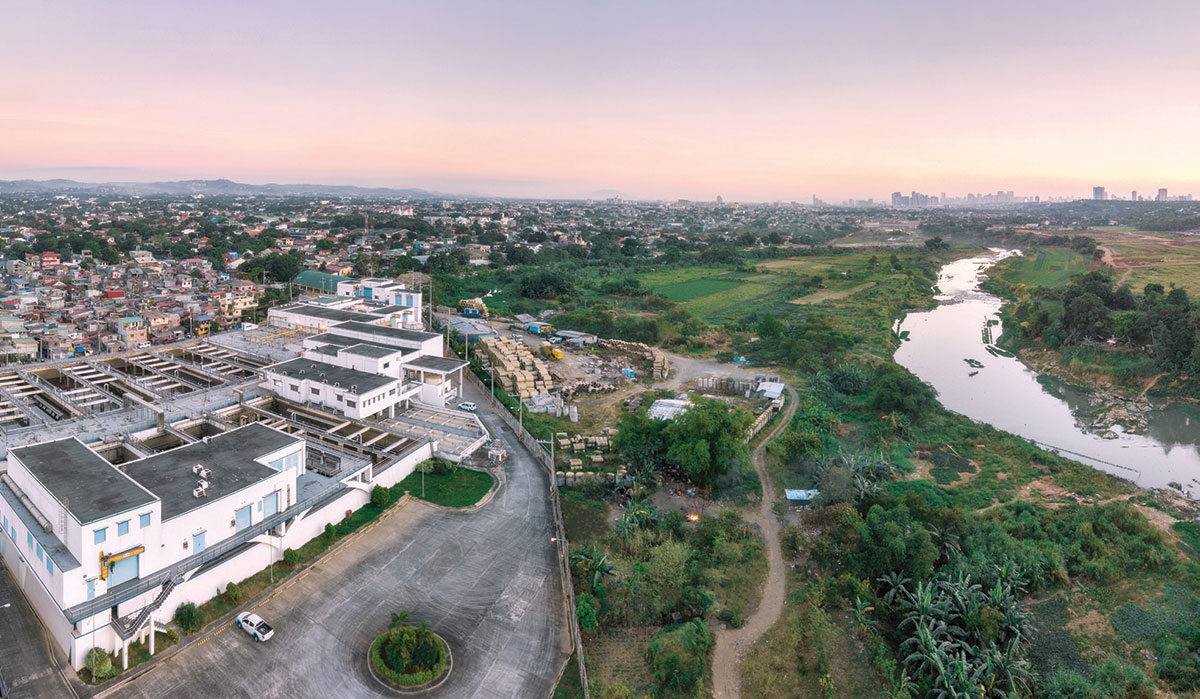 Manila Water continues to implement watershed management initiatives to improve raw water quality drawn from its water sources. The Manila Concession provides funding support for the protection of the 6,600-hectare Ipo Watershed and the rehabilitation of the 2,659-hectare La Mesa Watershed Reservation. Under the joint administration and supervision of MWSS and the Department of Environment and Natural Resources (DENR), Ipo Watershed is patrolled by around 170 Bantay Gubat volunteers comprised mostly of Dumagats, the indigenous people living in the watershed. On the other hand, the La Mesa Watershed Reservation Multi-Sectoral Management Council and its Technical Working Group (composed of MWSS, DENR, the Quezon City local government, Manila Water, Maynilad, and ABS-CBN Lingkod Kapamilya Foundation’s Bantay Kalikasan) oversee the management of the La Mesa Watershed Reservation.

Manila Water helps protect the forest areas of the watershed reservations. The company continued the enrichment of open canopy forests in La Mesa by planting an additional 40,000 broad-leaf forest tree seedlings across 100 hectares and the continuous maintenance of 341 hectares of enriched areas that were planted in 2016 and 2017. Through the joint validation activities conducted by DENR and MWSS in October 2018, which included site inspection, actual counting of trees, and the use of Orux Map application, it showed that there was a 91 percent survival rate in the 100 hectare newly enriched area. Manila Water also annually supports the One Million Tree Challenges of MWSS which started in 2017.

For the Umiray Watershed Reservation, Manila Water also participates in the watershed management initiatives in partnership with the local government of General Nakar, Quezon. Under this project, around 30 Bantay Gubat patrols were deputized to carry out forest protection. Similarly, community development initiatives such as Information, Education and Communication (IEC) campaigns, community livelihood programs and other initiatives were undertaken to reduce man-made pressures on this water source augmenting the raw water of Angat Dam.

Manila Water has also partnered with the University of the Philippines– Los Baños Foundation for the preparation of a Climate Responsive Integrated Master Plan for the critical watersheds (Kaliwa, Kanan, Agos) in General Nakar, Infanta, and Real, in Quezon Province. 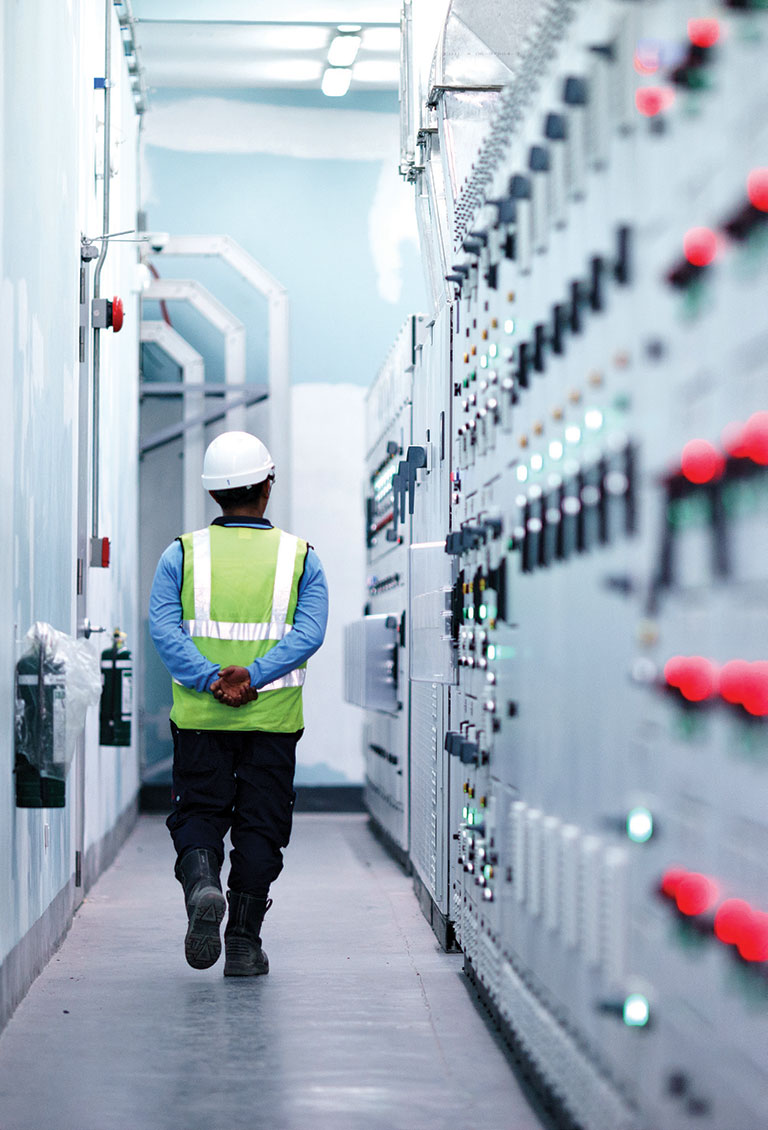 Over the past year, the Manila Concession made improvements in the delivery of water and used water services and continuously reached out to a greater number of people, including those most vulnerable to water stresses. This allows the company to make major contributions to meeting the water and sanitation targets of UN SDG 6.

With the solutions provided, water supply coverage currently spans at 93.02 percent of the concession area from 92.93 percent in 2017. In 2018, water availability was also enjoyed consistently by 100 percent of customers connected to the Central Distribution System.

With the exception of emergency leak repairs and pipeline rehabilitation, customers in the Manila Concession had stable 24-hour access to clean and potable water supply in 2018. The level of system losses as measured through non-revenue water (NRW) was reduced from 11.6 percent in 2017 to 11.4 percent in 2018, maintaining its NRW (end-of-period) below 12 percent for about 10 years now. This operational excellence highlights the value of an effective primary line and distribution network management with support from partner contractors and local community partners called kasanggas.

The company also continued to invest in resiliency programs to protect its critical services especially in times of disaster and to meet its customers’ needs should those times strike. Specifically, to ensure Manila Concession’s customers of continuous service in the event of a 7.2-magnitude earthquake that could be brought about by a movement in the West Valley fault line, the 59-yearold Balara Treatment Plant 2 is being upgraded to improve the stability of the structure and strengthen the facility. As of end-2018, the project is 66 percent completed.

A more in-depth discussion of how the company manages its risks is found in the Enterprise Risk Management section of this report. 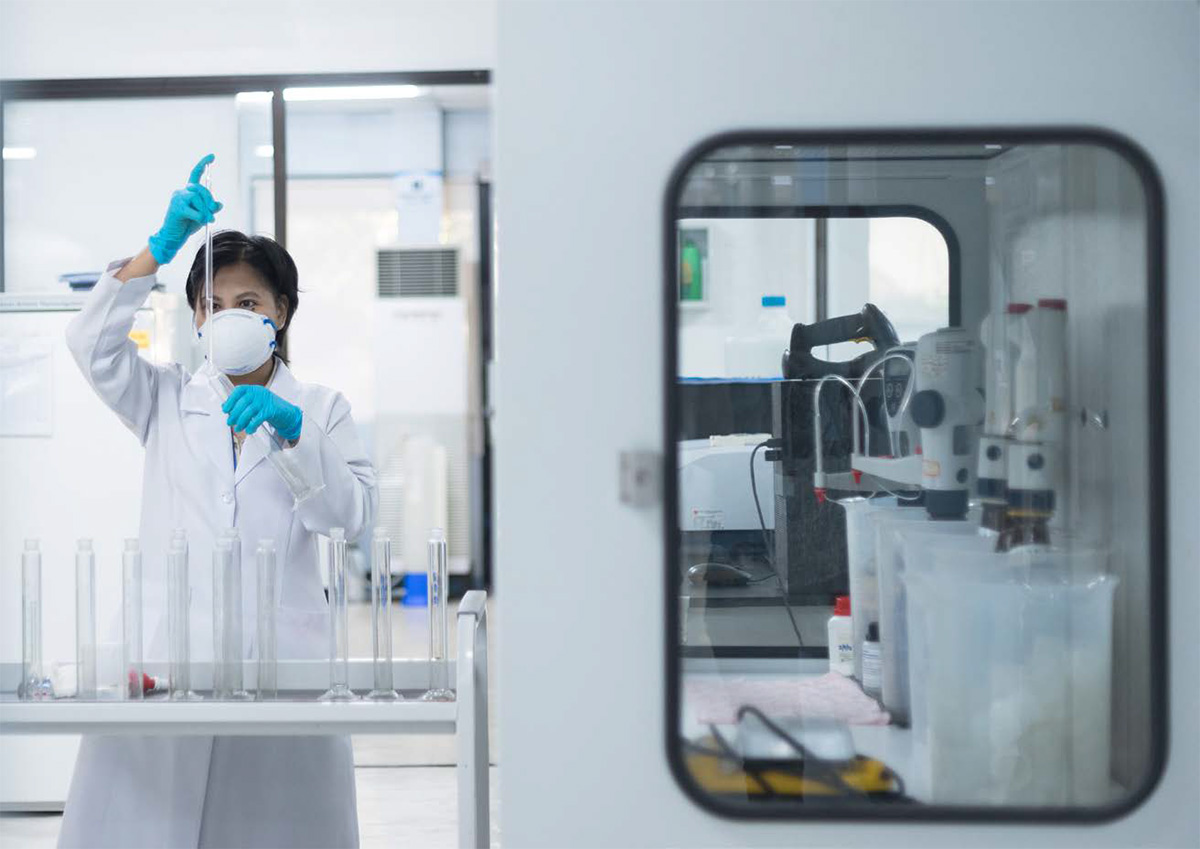 Improper used water management and sewage infrastructure can lead to alarming consequences, not least of which are epidemic outbreaks, and could compromise a country’s sustainable development.

A large part of Manila Concession’s capital expenditure in 2018 focused on the completion of its used water projects. An additional 100 mld capacity will be realized with the completion of the Pasig North and South Sewerage System, also known as Ilugin Sewerage Treatment Plant (STP), which was 82 percent completed in 2018. These improvements along with the Three River Masterplan would contribute to the Manila Concession’s target of 100 percent sewer coverage by 2037.

The Manila Concession values partnerships with the public and private sector in its advocacy to raise awareness on the importance of water, used water, and the environment. The company’s Lakbayan or the Water Trail Program provides participants with a tour of water supply and used water treatment facilities for a better understanding of the water cycle and how various stakeholders have an important role to play in water security.

In 2018, 109 barangays and 22,238 participants from national government agencies, local government units, academe, media, and corporations participated in the Lakbayan Program. Focusing on the youth and raising awareness on used water treatment and solid waste management, the Manila Concession has an employee volunteerism and sustainability program called Bawat Patak Tumatatak Goes to School. In 2018, the program was able to reach 689 elementary students both from public and private schools.

To advance the company’s environmental advocacy and strengthen partnerships for the rehabilitation of water bodies, Manila Water has a program called Toka Toka, which aims to revive Metro Manila’s polluted rivers. As of 2018, the Manila Concession partnered with 34 local government units and non-government agencies. The campaign encourages customers and partner organizations to practice proper waste disposal, ensure proper sewer line connections, have their septic tanks desludged every five years, and support other communitybased water management projects.

The company also supports the Supreme Court continuing mandamus for the clean-up and rehabilitation of the Manila Bay.