Manila Water’s business rests on water, and the company remains at the vanguard of protecting the environment that sustains this resource. Throughout the water cycle–from sourcing to used water treatment– Manila Water consciously operates on the impact of climate change and implements various initiatives that improve its long-term sustainability. In partnership with stakeholders, the company advocates for environmental protection and stewardship, with the will to act and do its part. 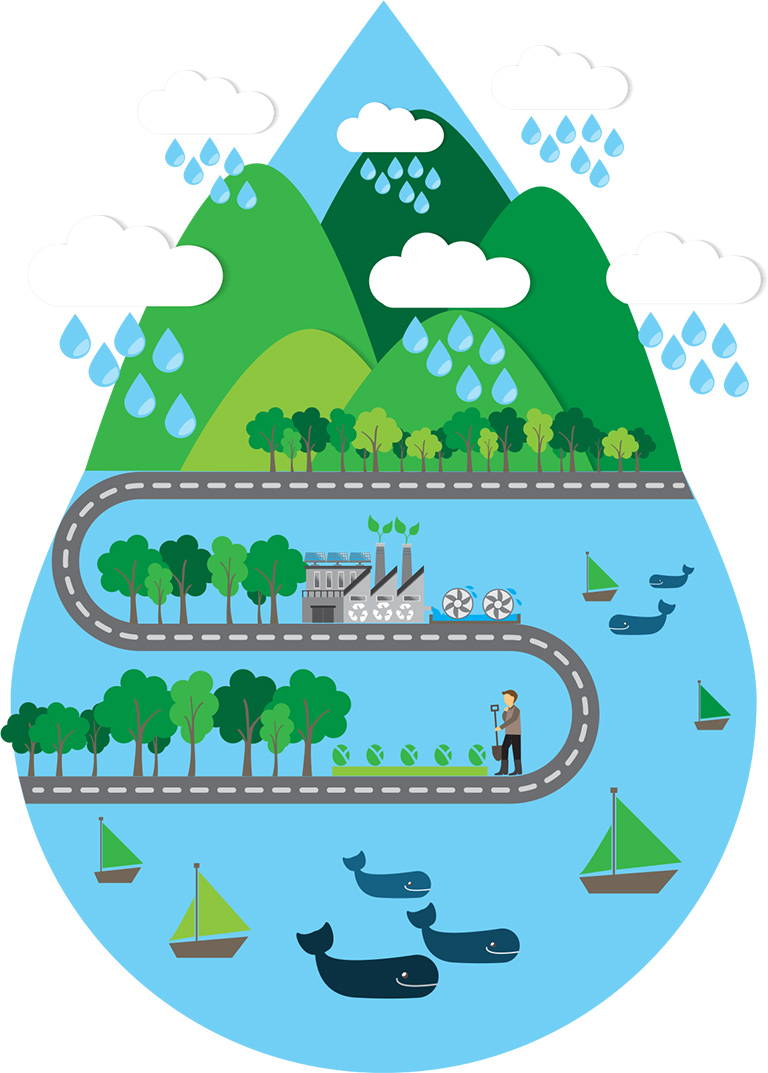 As the availability and quality of raw water continue to be affected by climate change, deforestation, and increasing water demand, Manila Water recognizes that it must mitigate climate-related risks on its business, and maximize opportunities that improve environmental sustainability.

To ensure reliable water supply, the Manila Concession and its subsidiaries have masterplans for short-, medium-, and long-term water source development projects. As an example, Laguna Water, Cebu Water, and Clark Water have conducted groundwater and surface water studies to determine the viability and sustainability of their sources.

The company also continues to implement watershed management initiatives to improve raw water quality drawn from water bodies, the results of which have amounted to over 9,000 hectares of watersheds being protected in the Philippines.

In 2007, Manila Water was the first Philippine company to issue a Board-ratified Climate Change Policy, predating the formal legislation national climate change plans by several years. This policy promotes the implementation of climate change mitigation and adaptation initiatives throughout the entire business–a consciousness that persists and strengthens in the company culture to this day.

Reinforcing this commitment, Manila Water updated the policy in 2014 and 2018, and strengthened the Climate Change Council through the creation of subcommittees to spearhead the enhancement of climate resilience and climate change mitigation measures in its assets and operations. It also serves to promote the sharing of best practices across the Enterprise, as key managers head the committees on resiliency of assets, disaster risk reduction and management, water source development and management, and climate change mitigation. The Board of Directors furthermore nominated the President and CEO as the champion of the company’s sustainability agenda.

Manila Water makes sure that its water withdrawals from groundwater and surface water sources as well as its discharges are within regulatory limits, and done in a manner that protects the resource and receiving bodies of water.

In 2018, Manila Water withdrew a total of 864.77 million cubic meters (mcm) of surface and groundwater across all its operating subsidiaries in the Philippines and its Manila Water Asia Pacific operations in Thu Duc Water and Kenh Dong Water.

The company properly treated used water in its 60 used water treatment facilities for its domestic ventures, with a total capacity of 415,241 cubic meters per day. There are three ways by which used water is conveyed to treatment facilities. It can be through sewer lines, combined sewer-drainage system, or by septic tank desludging. The company met the effluent water quality standards set by regulatory authorities, treating used water in a series of processes (such as pre-treatment, activated sludge or aerobic digestion, sedimentation, clarification, and disinfection). Manila Water submitted compliance action plans to the Department of Environment and Natural Resources (DENR) and Laguna Lake Development Authority (LLDA) given the Revised General Effluent Standards of 2016 (DAO 2016-08). The revised regulatory standards require the removal of nutrients such as nitrogen, phosphorus, and ammonia to reduce algal growth in water bodies. For the Manila Concession, facilities will be upgraded to further remove these identified nutrients in used water.

Manila Water enhances its operational efficiency through continuous improvement and optimization of key processes for greater efficiency in the use of resources and reduce wastes and emissions. These efforts further improve the company’s environmental performance. 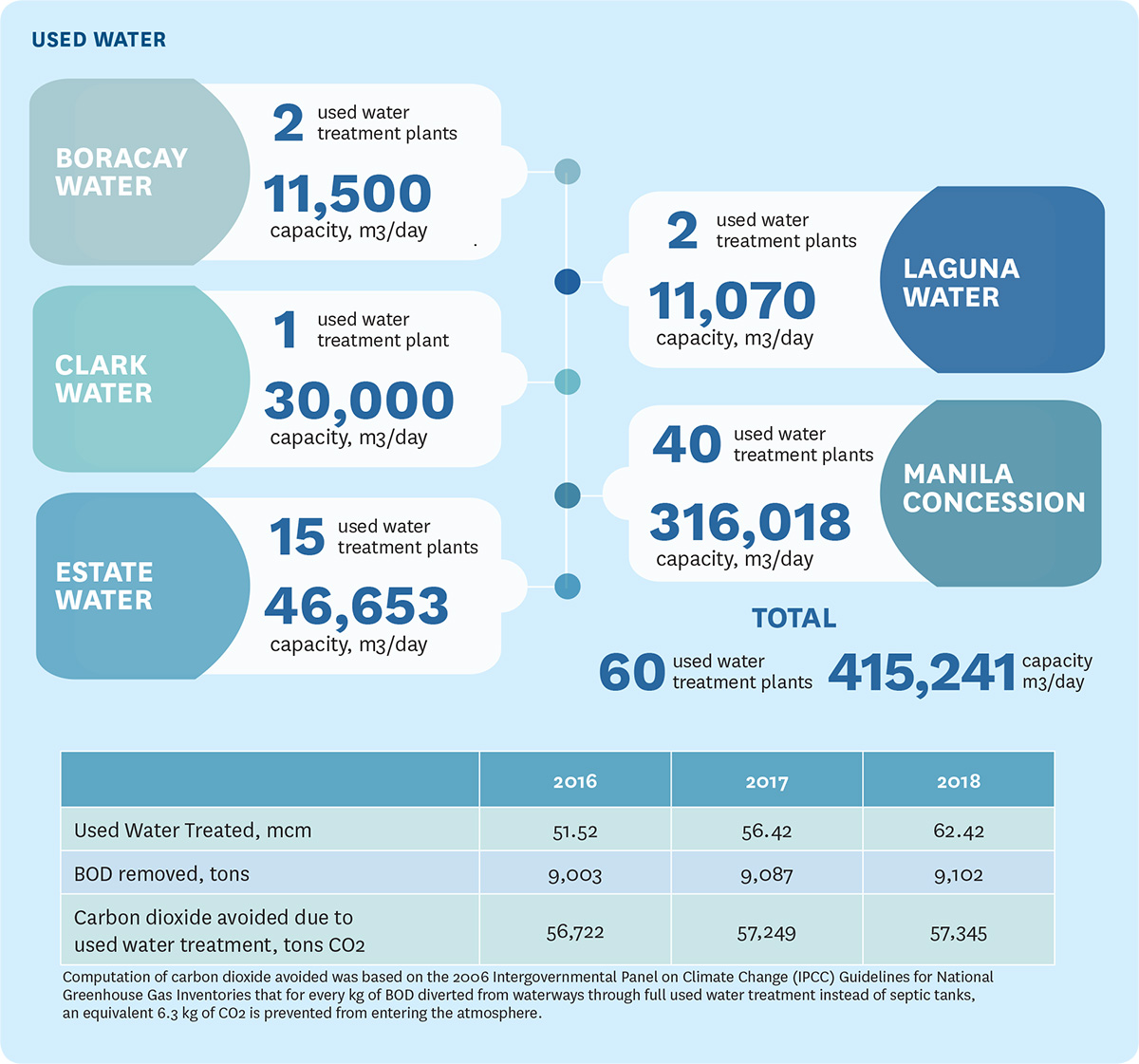 Manila Water has a comprehensive non-revenue water (NRW) program to reduce water losses in distribution lines. The successful execution of the NRW reduction activities involves leak detection, pipe replacement, meter inspection and calibration, as well as the quick resolution of incidents and responsive coordination with stakeholders (such as third-party contractors, national government agencies, local government units, and other entities).

The company continuously implements best practices on NRW reduction that translates to operational and cost efficiency gains in the distribution of potable water. Through the program, the Manila Concession recovered an average of 780 million liters per day (mld) or 285 mcm of water per year since 1997–the amount of recovered volume is equivalent to a medium-sized dam. This contributed to network efficiency which provided additional water supply to more customers and also avoids unnecessary CAPEX cost.

The NRW program is being successfully replicated across the operating subsidiaries, with a consolidated water recovery of 50 mld or 25 mcm per year. Clark Water’s Just-In-Time production system and the Manila Concession’s Project Lights Out, which automates pumping stations, are among the initiatives that contribute to the prevention of leaks and pipe breakage. The NRW reduction project in Zamboanga City, which operates under a joint venture between Manila Water and the local water district utility, recovered 12 mld or 6.16 mcm of water losses per year, established 36 district metering areas, and executed 9,435 leak repairs in just two years.

Chemical consumption is dependent on the quality of raw water and incoming used water. In 2018, the company saw a significant increase in the chemical concentration of its water supply, due to high turbidity at the La Mesa Watershed and Luyang River brought about by strong typhoons and rains. Innovations and various operational improvements are implemented to mitigate the effects of these adverse occurrences. Watershed protection and rehabilitation is further strengthened to prevent soil erosion which affects the turbidity of raw water.

Automation is being undertaken whenever, feasible and applicable. Initiatives such as Just-In-Time, Project Lights Out, NRW reduction, optimization and shifting to ultraviolet used water disinfection contribute in the improvement of chemical efficiency.

Energy is one of the highest operating expenses of Manila Water given the energy-intensive nature of its operations. Guided by its Climate Change Policy, the company optimizes its operational efficiency by utilizing energyefficient technologies that further aid in climate change mitigation. The company also implements its integrated management systems on Quality, Environment, Energy, Health and Safety in its key operations.

Since 2014, the Manila Concession has been certified according to ISO 50001:2011 Energy Management System for its 10 largest energyconsuming facilities. It also implemented VFD installation, LED and AC inverter upgrade, and pump efficiency tests.

For other subsidiaries, various activities such as pipe re-sizing, upgrade of equipment, automation, and optimization of processes and other operational improvements contribute to energy efficiency. As mentioned, the company implemented the Project Lights Out initiative this year, which also addresses energy efficiency through automation.

Clark Water and Boracay Island Water have installed solar lamps, while Laguna Water installed solar panels in its Booster 3 facility that generates an average of 265 kWh/day.

A 1.2-megawatt (MW) mini-hydro power plant will be incorporated in the Novaliches-Balara Aqueduct 4 project—a new aqueduct to serve as a conveyance reliability line from La Mesa Dam to Balara Treatment Plants—and it will provide 50 percent of the electricity needs for Manila Water’s Balara treatment facilities that will be operational by 2021. Manila Water also has a pilot waste-to-energy project that uses sludge as input to generate electricity at the FTI Septage Treatment Plant.

Because of the energy efficiency and renewable energy initiatives across the Enterprise, Manila Water enjoyed a total savings of 5.11 million kWh electricity in 2018, equivalent to ₱37.4 million. 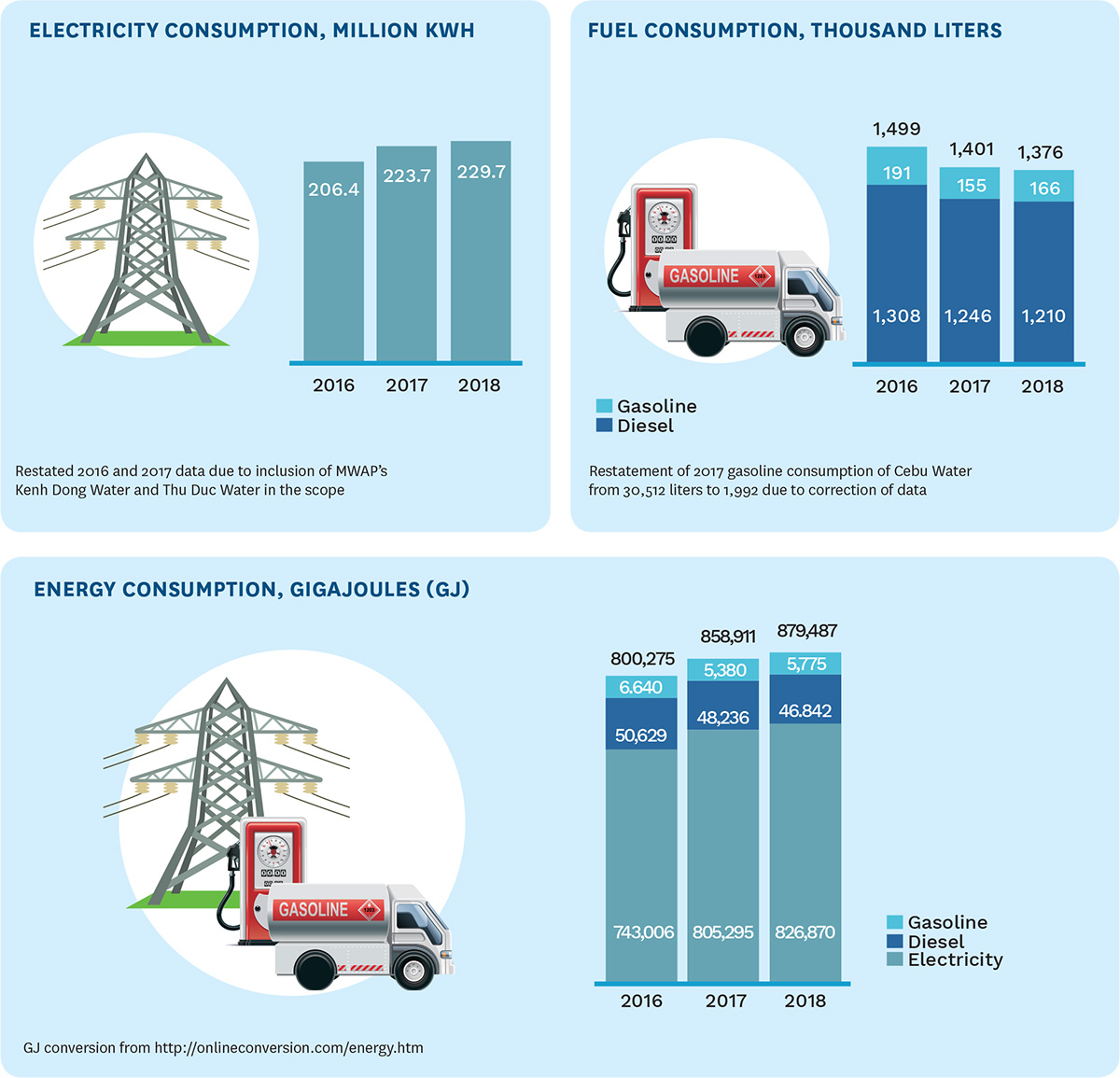 Even as Manila Water continued to grow, the company’s Greenhouse Gas (GHG) intensity has remained at a constant level over the past three years, due to the energy efficiency initiatives that are in place. The company’s Climate Change Council (particularly the Climate Change Mitigation Committee) and the Enterprise Functional Council also ensure collaboration among the subsidiaries of Manila Water by promoting the sharing of best practices and technologies on energy efficiency and use of renewable energy.

Manila Water also contributes to the capture of carbon from the atmosphere with 955,086 trees planted in watersheds and surrounding areas of operations since 2006. 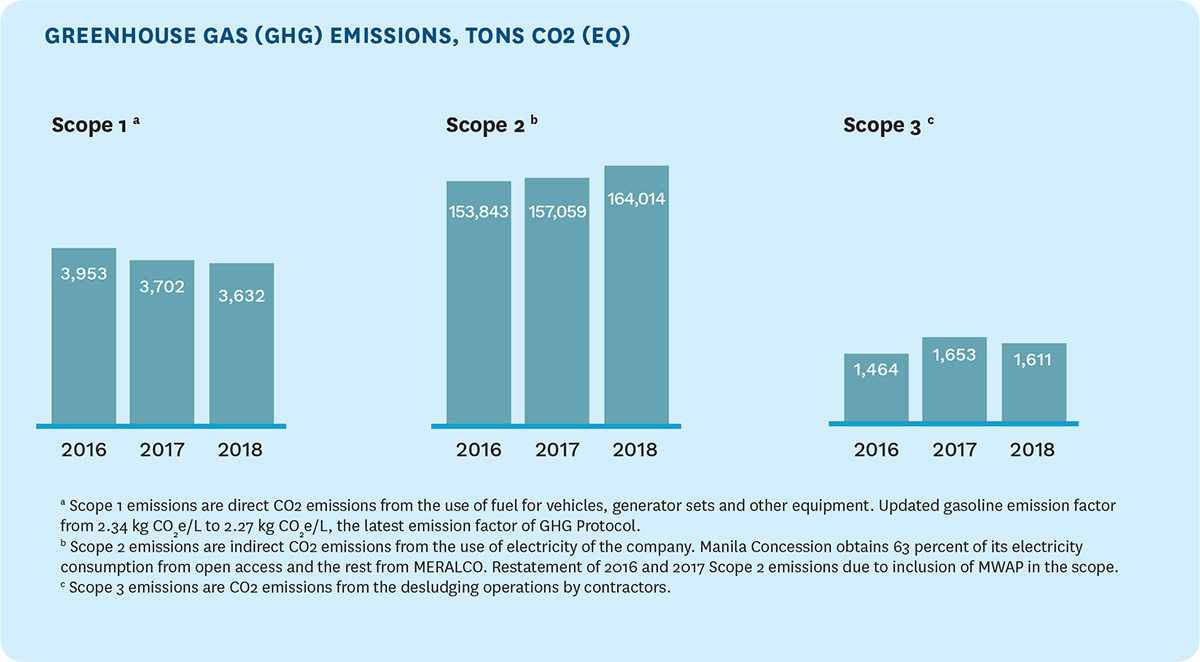 GHG INTENSITY
Restatement of 2016 and 2017 data due to inclusion of MWAP’s Kenh Dong Water and Thu Duc Water, and updating of emission factor of grids
EMISSION FACTORS

Grit and screenings are properly disposed of in a sanitary landfill, while biosolids are composted by a third-party service provider which are then used as soil conditioners in lahar (volcanic ash) covered areas, particularly in Tarlac. Other nonhazardous solid wastes generated in offices and facilities are segregated and disposed of properly. Recyclable materials are sold to junkshops while old meters are sold to recyclers. 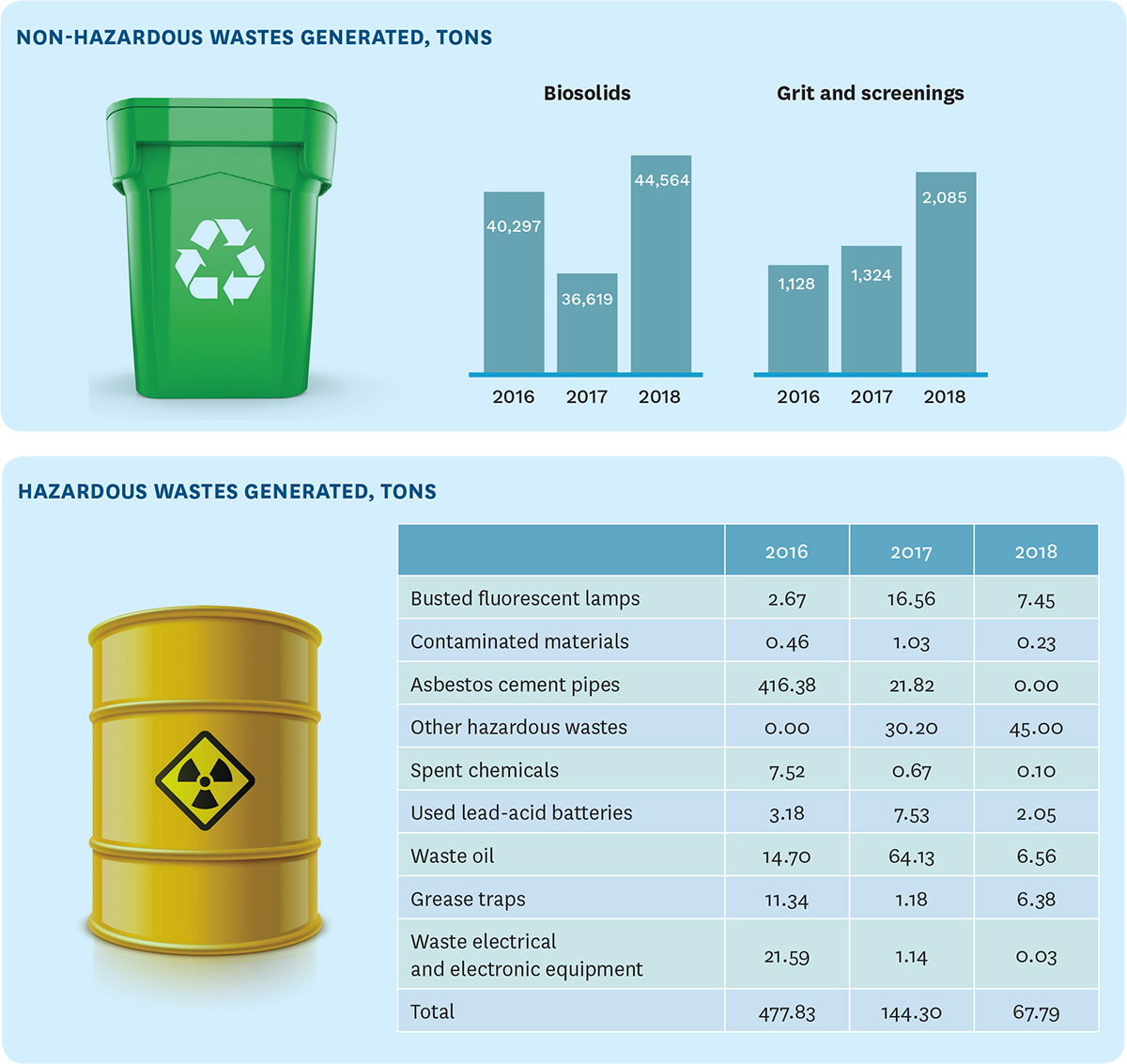 Manila Water harnesses and strengthens its intrinsic focus on the environment through advocacy programs with key stakeholders. The company works together with various communities through initiatives that engage at both educational and behavioral levels, and it forms meaningful partnerships with community-based organizations that help advance the company’s environmental advocacy. These are on top of the regular engagement activities that the company conducts year-round through channels including seminars, trainings, forums, bulletins, and social media.

Among its key programs is the Toka Toka campaign that aims to revive Metro Manila’s polluted rivers.

The company builds support for the rehabilitation of these water bodies and good water management projects, as it enjoins national government agencies (NGAs), local government units (LGUs), private institutions, and individuals to take part. By end of 2018, the Manila Concession has partnered with a total of 34 LGUs and NGAs for the campaign.

Manila Water also organizes Lakbayan tours, a water trail education program, to help raise awareness on the value of water and thus the need for wise and mindful consumption of water. Being a mission-driven organization, the company also supports its communities through Bawat Patak, Tumatatak as the company’s flagship employee volunteerism program.